Long before Bi Folding or sliding patio doors were available, upper-class French and British property owners enjoyed the ease of walking through to the lawn or terrace via double doors. French Doors are centuries old and still popular today, often included in smaller new-builds, where space is scarce.

In England, in the 1950s, large scale housing projects took place just outside cities, particularly London. During the '50s and '60s modern homes were often fitted with sliding patio doors, bringing light into the house and access to gardens. Unfortunately, the build quality wasn't the best - they were often single glazed and didn't slide very well along the grooves, as the technology we have today wasn't available.

Sliding doors did improve, using metal or nylon casters or wheels to ease the sliding process and, during the 1970s, double-glazing was becoming standard in all doors and windows. In general, home-owners had a choice of modern sliding doors or traditional French doors. Often though, the timber used for French doors would warp, causing draughts.

Following the turn of the century, a new concept in patio doors enabled the doors to fully be retracted. Bi folding doors opened up virtually the whole "wall" for people to access between two spaces. Bi folds were fitted to external walls to the patio or to a conservatory; people enjoyed a whole new level of entertaining guests during the summer. 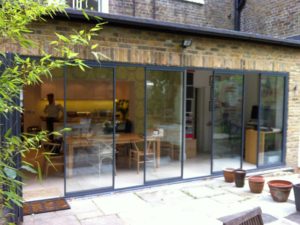 Within ten years, a British door company launched a new type of door; like bi-folds but without hinges. Slide and swing doors are now available from a number of suppliers but UltraSlim Doors are only available from one manufacturer. More chic and sleek than bi folds, they slide, turn and stack, have slim profiles and ultra slim aluminium frames in a range of contemporary colours.

Contact us for your bi folding or sliding-stacking patio doors.